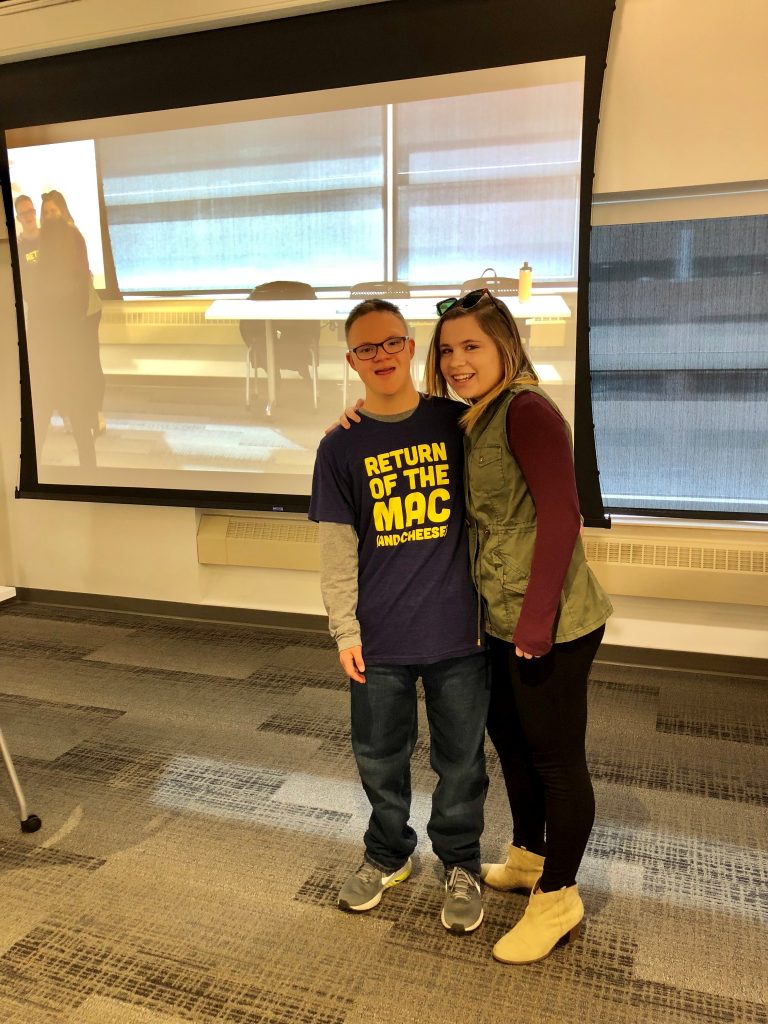 When 14-year-old Mac Austin of Verona, Wisconsin goes to the doctor sometimes the doctor doesn’t even shake his hand…or ask him questions. That’s because Mac has Down syndrome and medical professionals often make assumptions about what people with intellectual and developmental disabilities (I/DD) can understand. The Arc is working to change this by creating new  tools like this Letter to My Doctors that will help people work with their doctors  and help them to take charge of their health.

Mac has also found the power of a friend in his doctor visits. Recently he and best friend Delaney spoke to a group of 300 at the University of Wisconsin-Madison including medical students, physicians assistant students  nursing students, social work students, genetic counseling students, professors and doctors.

Read Mac’s and Lexy’s statements below.

Statement to UW-Medical Students by Mac Austin of Verona

Hi, my name is Mac and I have Down syndrome. I am 14 years old and I go to Verona High School. I am here today with my mom and dad, my brother Griffin, and my best friend Delaney.

I would like you to know that I am funny. I am smart. I am loved. If you give me a chance, I will surprise you.

When I first met Mac in fourth grade I immediately knew we would be friends, he was so funny and caring. There wasn’t anything NOT to love about him, but even at 9 years old I knew there was something different about Mac. Later that year Mac’s parents came into talk to us about what Down Syndrome was and how sometimes it makes things more difficult for Mac or might take him longer to be able to do things, but he is just like us, he wants to have fun and play with his friends like any other fourth grader would want to do. So, at that point I was just thinking okay that makes sense he does have something that technically make him different, but I didn’t let that affect our friendship.

Over the past six years Mac and I have become best friends. My friendship with Mac is a lot like the friendships you would have with anyone, we love to hang out, make each other laugh and have dance parties, but being friends with Mac also has some difficulties that I wouldn’t have with another friend. When people see me as Mac’s friend they immediately think 1 of 2 things. Either, aww how sweet that she is being friendly to him or she can’t actually be friends with them she’s probably just doing it to make herself look good. People don’t immediately think that those people are just two genuine friends who enjoy each other, the reason being Mac has a disability, so people think that I can’t possibly have a “normal” friendship with him. While my friendship with Mac might be exactly like your relationship with your best friend, we still have a friendship that to us is normal.

One of my absolute favorite memories I have with Mac was this past October when we went to Homecoming together. We planned that our colors would be red and black, and we couldn’t wait for the big night. We had so much fun taking pictures, eating dinner and dancing the night away. The reason I asked Mac to homecoming was because he is one of my best friends and I knew I would have the most fun with him, but the end result was so much more than that. Hundreds of high school students got to see that Mac wants what every other high schooler wants, to enjoy his first school dance with his friends.

My relationship with Mac has helped me reveal so many qualities I didn’t even know I had within myself and has made it clear to me that my passion is working with kids with special needs. Last spring I had to do a final project for all my classes called, “The Passion Project.” I choose to do mine on Down Syndrome. Each kid had to not only do research on the internet about their topic but have an experience where they could get information and see their topic in the real world. I didn’t really know what I should do for my experience, so I asked Lexy (Mac’s Mom) what she thought I should do. She offered for me, with Mac’s permission, to come along to a couple of Mac’s medical appointments to get to see the medical side of things which I had never been able to see before!

A few days later we headed to the hospital for Mac’s three appointments that day. During the first appointment two nurses who were familiar with Mac came in and greeted Mac, then Lexy then introduced them to me. After that Mac had his second appointment and a resident came in before the appointment and greeted Lexy, then myself then Mac. This didn’t seem quite right to me because Mac was the patient but in the moment, I didn’t think much of it.

Once the resident was done, a doctor who has known Mac for years entered the room and automatically greeted Mac and asked him how he has been and what he has been up to since the last time she had seen them. It was obvious that she genuinely cared for Mac and was happy to see him.

Mac’s final appointment of the day was with a new doctor who he had never met before. When this doctor walked into they shook Lexy’s hand, shook my hand and continued to walk to the computer not even acknowledging his patient. What I learned at those appointments was so much more important than any website could have taught me. I got to see first-hand the discrimination towards Mac based on his disability. The people who already knew Mac when they came in and treated him as they would anyone else but the people who didn’t know him automatically assume that he is what his disability labels him as instead of a person who deserves to be treated like anyone else.

Once people get to know Mac they see that he is so much more than a disability, but it is an immediate assumption that he is “a kid with Down Syndrome” instead of Mac.

Our world has a long way to go when it comes to treating everyone equally. Whether it be race, religion, gender, class or disability every single person you meet deserves an open mind.

The last thing I want to leave you with is this, do you see, “the kid with Down Syndrome” or you see “Mac”?