The Arc Wisconsin worked with self-advocates from People First Wisconsin to develop this summary of the proposal in Washington to use Per Capita Caps to reduce federal funding for Medicaid programs: Explaining Per Capita Caps 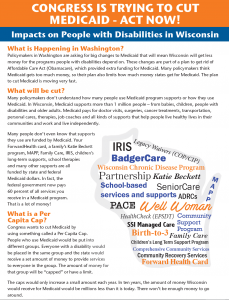 The non-partisan Congressional Budget Office released estimates on March 13 indicating that Medicaid spending would be reduced by $880 billion (25% less compared to current law) over the next decade.

Medicaid Per Capita Caps would go into effect beginning in 2020, limiting the amount of federal Medicaid funding provided to states.

Watch this video on Per Capita Caps by the Survival Coalition of Wisconsin Disability Organizations and featuring Director of The Arc Wisconsin, Lisa Pugh: